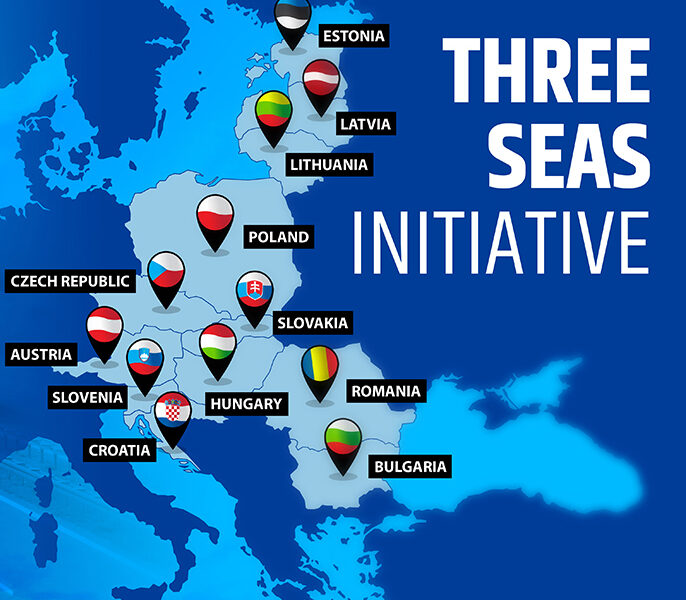 Background
The geographical space between the Baltic, the Black Sea, and the Adriatic Sea has for centuries been a playground of different empires like the Russian Empire, the Austro-Hungarian Empire, and the Soviet Union in the 20th century. These different empires have affected differently the political and economic development of the countries in this geographical space. Now those empires have become part of history and the region has become part of the European Union.
One thing in common for all the twelve countries that make up the Three Seas Initiative is their common recent experience of communism. While in the last three decades since the fall of the communist regimes in these countries economic development has gotten them closer to the Western Europe levels. But the region still suffers from bad infrastructure compared with Western Europe, a lack of interconnectivity between the countries, and a lack of digital investments. The gap between this region and Western Europe which was created during the second half of the 20th century is yet to be bridged, three decades after the fall of communism. Also, during the communist period, pipelines and railways were built from west to east, aiming to transport gas and other products to Western Europe. The Three Seas Initiative aims to build from North to South.
This gap between Eastern Europe and Western Europe was the inspiration for the Three Seas Initiative. It was initiated by the Croatian President at the time Kolinda Grabar Kitarovic and the Polish President Andrzej Duda.
By area, the Three Seas countries represent almost a third of the European Union and are home to 111 million people. However, figures from 2018 show that their average GDP per capita is just 78% of the EU average. At the same time, the average economic growth in the 12 countries from 2015-2019 was 3.5% compared to 2.1% in the European Union.

Main projects
The three seas initiative is a political initiative with a focus on economic and infrastructure development.
Extremely relevant is the fact that the idea for the TSI emerged soon after Russia annexed Crimea in early 2014. This suggests the constituent states of the TSI not only want to overcome communist-era legacies and ‘catch up’ to the rest of Europe economically but also that a good number of them are motivated by the desire to create an alternate trading block that would mitigate reliance on Russia.
As of July 2021, the Three Seas Initiative has 90 interconnection projects with a total estimated investment value of €180.9 billion. Registered in 2018, the Rail-2-Sea project is a Three Seas Initiative plan to build a railway connecting the port of Gdansk and the port of Constanta across Poland, Slovakia, Hungary, and Romania. This plan will further link the Baltic Sea to the Black Sea over four different branches of a railway, each with its local plans for modernization.
Another Three Seas Initiative infrastructure plan is the Rail Baltica plan. This plan aims to increase infrastructural integration between Baltic Sea nations. More specifically, in a partnership with Finland, Rail Baltica is creating infrastructure to construct “missing cross-border connections” and “integrate the Baltic States in the European rail network” while dissolving “transport infrastructure bottlenecks.”
These plans and projects are contributing to the region becoming an economic driver for all of the European Union.
The initiative has also a geopolitical aspect. It was embraced by the Trump administration as a way to counter Russian and Chinese influence in the region, but because of the erratic foreign policy of Donald Trump, his embrace may have something to do also with the desire to counter the European Union also in the region. The next American administration continues to support the initiative and to view it as a considerable economic potential on one hand but also as a way to counter Russian and Chinese influence.

Three Seas initiative and the Western Balkans
The countries of the Western Balkans share almost the same historical background as the twelve countries of the Three Seas Initiative. They both come from the same communist past, creating a considerable economic and development gap with Western Europe. The Western Balkan countries also went through the same market reforms and privatizations in the 90s, but differently from TSI countries, WB countries for different reasons and specific for each country didn’t achieve the same results. While TSI countries have an EU average of 78% of GDP per capita, the average figure for Western Balkans is 35%, with countries like Albania and North Macedonia even lower.
Similar to the TSI countries, Western Balkan countries have huge infrastructure problems. The countries of the former Yugoslavia have rail connections but they are considerably degraded and need investments to be renovated. At the same time, there are no rail connections between Albania and neighboring countries like Montenegro, Kosovo, and North Macedonia, thus preventing economic development and trade between these countries and countries further away in the region.
Countries of the Three Seas Initiative have been the most powerful supporters of the EU integration of the Western Balkans, even when criticisms have come from Western European countries. Also, some TSI countries like Poland and Hungary have considerably increased their trade and economic presence in the Western Balkan countries. But the economic potential between these two regions is still far from its fulfillment. One way to bridge this gap between the two regions is a possible future participation of the Western Balkan countries in the Three Seas Initiative or an agreement for trade and connectivity projects between these two regions.
Some of the Western Balkan countries like Serbia for example have historical links to Hungary, Romania, and Poland while for other countries like Albania, being part of TSI would connect the country with a region with which it has few economic and trade links, but which is a growing economic space. At the same time, including Albania in the TSI initiatives would include in this project the Durres port, the major port in the Adriatic Sea, which would open up new possibilities for involvement and collaboration with Italy. Albania could also offer an alternative to Russian gas, through the Trans Adriatic Pipeline, with projects planned to connect the pipeline from Albania with countries of Central Europe like Hungary and the Czech Republic.
Railways could be a major point of contact between the two regions and have considerable economic potential. Countries like Albania, North Macedonia, Kosovo, Montenegro, Bosnia, Herzegovina, and partly Serbia are little or not connected at all with the railway networks of Western and Eastern Europe. While on the other hand, the Polish freight market is the second largest in the EU after Germany’s. At the same time, Czech railways are well connected to Polish, Hungarian, and Western European railways. The EU member states, including the countries of the Three Seas region, are obliged to increase the use of railways for freight and passenger transport. This will contribute to reducing carbon dioxide emissions.
At the same time, the Western Balkans being part of the TSI initiative would become a strong push toward EU integration. The Western Balkans lags considerably in Western and Eastern Europe when it comes to GDP per capita, infrastructure, and digital transformation. Being part of the TSI and constructing new connections with the countries of Central and Eastern Europe would help the region to move forwards towards the EU average. In this sense, the participation of the Western Balkans in the TSI would be seen as the first step towards EU membership.
Another important point of contact between the Three Seas Initiative and the Western Balkans is the energy sector. While Eastern Europe is moving away from Russian gas and oil, it is trying to find alternative energy sources. LNG is one of them, but another source could be Azerbaijani gas. In this view, Albania and the Trans Adriatic Pipeline could become also an alternative for Central and Eastern Europe. Already proposed spin-off pipelines to Croatia and Kosovo could be extended further north towards Hungary, Poland, Slovakia, and the Czech Republic.
The war in Ukraine has changed the geopolitical and economic patterns of the continent. Europe is disengaging fast from Russian gas and oil and economic and trade with Russia in general. In this situation, the TSI takes on another meaning and significance. Building energy infrastructure and digitalizing their economies could be a way to counter the loss of Russian gas and oil. At the same time, there is growing friction between the EU and US on one hand and China on the other. The Chinese initiative 17+1 which now it has been reduced to 15+1 after the withdrawal of Lithuania and Estonia has almost faltered and China is now regarded not as a reliable partner.
These two developments have increased the geopolitical value of the Three Seas Initiative as an important project that shields the region from Russian and Chinese influence, but also gives the region a distinctive geopolitical identity of its own. 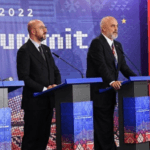 Next Story
Agreement reached in principle for College of Europe to open Tirana campus, a ‘historic’ development for Albania’s EU outlook