The New Greek Government and its Foreign Policy in the Balkans

Kyriakos Mitsotaki’s victory in the Greek elections was widely expected after winning the European and local elections.

Mitsotaki’s New Democracy party won almost 40% of the popular vote and 158 MPs in a 300 seats Parliament, an absolute majority. Moreover his party won in 51 from 59 electoral zones in Greece, the other 8 won by SYRIZA. This victory gives Mitsotakis the chance to create the most stable government in the last decade, since the beginning of the financial and economic crisis. This fact will certainly affect Greece’s foreign policy in the coming years. He will not have to worry because of the parliamentary allies’ reaction to his foreign policy, as was the case with Tsipras and his allies in the government, the Independent Greeks, after the Prespa Agreement. Relations with Albania will be of particular importance because of the many issues to be solved between the two countries, but also because some of these issues touch on historical sensibilities in both countries. 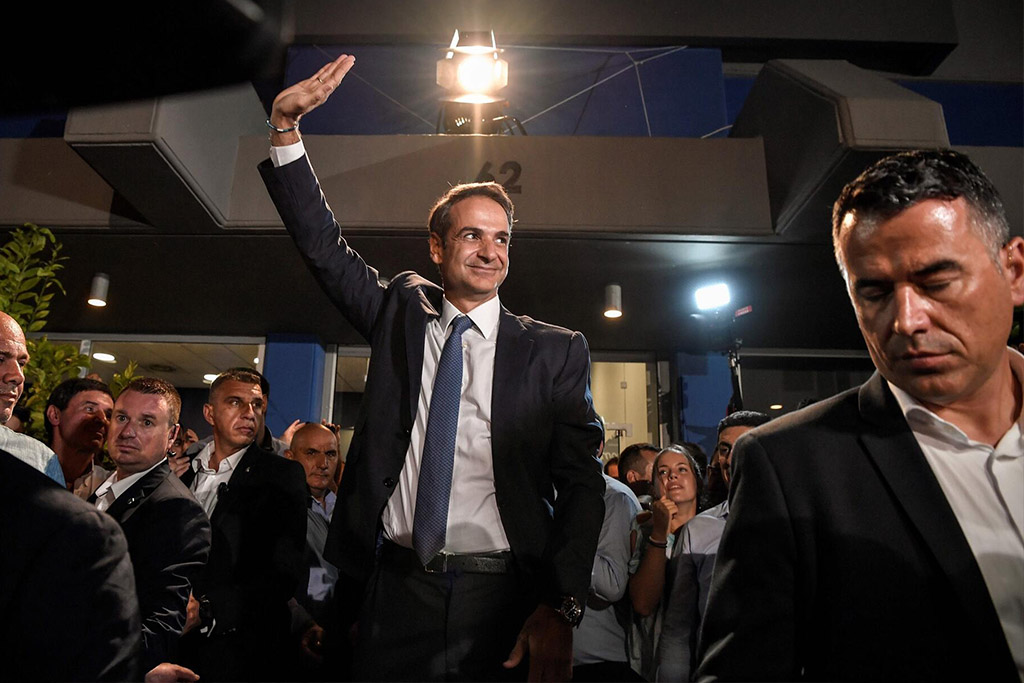 The new Greek government and Albania

During the electoral campaign, Mitsotakis spoke little about foreign policy, concentrating mainly on the economic and financial issues. But one of the most contested moves of the SYRIZA government has been the Prespa Agreement with the former Yugoslav Republic of Macedonia in order to change her name to North Macedonia and consequently end the almost three decades-old name-issue between Greece and now North Macedonia. At the time the New Democracy and Mitsotakis rejected the agreement and called on all the parliamentary parties not to vote it. In 2015 in Greek Macedonia, the New Democracy won almost half of the electoral zones, while in the other parts of northern Greece it won only one of the electoral zones. But in the July 7 elections in Greek Macedonia and in all the Northern Greece Mitsotakis’ New Democracy won every electoral zone apart from two.

Tsipras’ foreign policy, especially his conciliatory attitude towards North Macedonia, was probably the main reason why SYRIZA lost the elections. In this view, a more aggressive foreign policy may be expected because the new government would have to placate the voters who condemned Tsipras for his foreign policy. This more aggressive foreign policy may be expected even towards Albania as during the Albanian-Greek negotiations in the last two years, many times the then opposition party New Democracy expressed concerns about the lack of transparency on the negotiations, meaning that the Greek government was giving something to the Albanians, especially concerning the highly sensitive issue of Chameria, while not being more demanding on the Greek minority in Albania and the maritime border. This stance could make it even more difficult to reach an agreement between the two countries. The Greek government, because of the perception of leniency from the Tsipras government that has presented to the Greek public in the last two years, will have to show to the same public that is has won something from the agreement and has not been as lenient or ‘soft’ as the Tsipras government.

Also, the New Democracy and Mitsotakis when in opposition accused the Tsipras government of not reacting enough about the killing of the Kostandinos Katsifas in Bularat in southern Albania after he heavily armed attacked the Albanian police force. In the last years, the right-wing New Democracy party has attempted to create the impression in the Greek public that the Tsipras government has been lenient in its foreign policy, especially towards countries in the region, including Albania, North Macedonia and Turkey. A more aggressive foreign policy may be expected from the new government precisely to reverse this perception of leniency towards the region in the Greek public. This is possible also by the fact that the new government is finding a much more stable financial and economic situation of the country with an economic growth of approximately 2% and a small increase in pensions and wages. This allows the government to not be totally concentrated on the economy. But also, this allows it to put more financial pressure in south Albania, through the old-age pensions for Greeks and Orthodox non-Greek in south Albania, especially in the region of Gjirokastra, a policy which was suspended during the Tsipras government, even though mostly because of financial reasons. The money in most of the cases is given to persons who have never worked in Greece and the policy has for long been seen inside Albania as an attempt to Hellenize the Albanian Orthodoxs, especially in Gjirokastër.

In the last three decades, since the fall of the communist regime in Albania, the conservative right-wing New Democracy has been more vocal towards the Greek minority in Albania and confrontational in their attitude towards Albania, while in the past the socialists of PASOK and recently SYRIZA have maintained a more collaborative stance towards Albania and the Balkans in general. During Constandinos Mitsotakis premiership in 1990-93, he called the Greek minority in Albania not to abandon their homes in the south of the country, because he feared a loss of Greek influence in Albania if the Greeks started to leave en masse, while at the same time it was during the elder Mitsotakis’ government that Anastasios Yannoulatos became Archbishop of Albania, thus cementing the Greek influence in the Albanian Orthodox Church, which declared it autocephaly in 1922 precisely to escape Greek influence and control. In 2009 it was during the conservative government of New Democracy, when Mitsotakis’ sister Dora Bakoyannis was Minister of Foreign Affairs that was signed the Maritime Border Agreement, reportedly under pressure from the Greek government. The agreement was deemed unconstitutional by the Albanian courts and highly criticized by Albanian experts.

The choice of the new Greek Foreign Minister says much about the new foreign policy especially towards the border countries. Nikos Dendias is a well-known name in the Greek public, but also one of the best Greek experts on the international maritime law. In the last years Greece has had problems in defining its maritime border with Albania and Turkey. Dendias’ choice says that these issues are of outmost importance for the new government, but also that the Albanian government should be prepared for a much more expert and tougher negotiator.

Mitsotakis and the Balkans

In the last years, because of the economic and financial crisis, the Greek foreign policy in the Balkans hasn’t been much active. This has followed the partial economic retreat of Greece from several Balkan countries, as a consequence of the economic and financial crisis. Beginning with the fall of the communist regimes in the Balkans and Eastern Europe, Greece slowly became the first or one of the top three biggest investors in the countries of the region, including Albania, North Macedonia, Serbia and Bulgaria, especially in the financial sector. Now, Mitsotakis will have more time and opportunity to engage in foreign policy than his predecessor. The Greek economy has stabilized and has started to grow, even though modestly.

The flashpoint of Mitsotakis’ foreign policy in the next months and years will be Turkey. In the last months Turkey has upped its military relations with Russia buying the S-400 defense system, defying the United States and NATO and consequently will be probably expelled from the F-35 fighter jets program. This will not be only an economic loss for Turkey, where it is calculated that Turkey exports $12 billion worth of equipment for F-35 fighter jet program, but will create also geopolitical troubles. Turkey’s move is not unexpected. It comes after months of strained relations with the United States and the European Union, while aligning itself more and more with Russia, even though both are rivals in Syria. The troubles with the EU in last weeks come mainly from Turkey’s drilling for oil near Cyprus, in waters that are claimed by Cyprus.

This situation could be exploited by Greece. On one hand, Mitsotakis could try to strengthen Greece’s relations with the United States, while at the same time probably it will try to improve relations with Russia, which were strained during Tsipras’ government, as a counterbalance to Turkey’s new geopolitical proximity to Russia.

On the other parts of the Balkans, if the past history of New Democracy governments, including the one of Mitsotakis’ father in the beginning of the 90s, tell something for the present it is that the from the new government could be expected better relations with Serbia. Since Kosovo’s independence Greece has recognized Kosovo’s passports and has opened a diplomatic office in Prishtina, but a possible recognition of Kosovo’s independence from Greece could not be expected without a final agreement between Belgrade and Prishtina. Greece has been silent on the discussions about a possible territorial exchange between Serbia and Kosovo, probably because such a solution could be exploited by Greece, especially for the so-called North Epirus issue, but on the other hand it could also be exploited against Greece. This partially explains Greece’s silence on this issue so far.

In general, despite territorial or historical problems, especially with North Macedonia or Albania, Greece has been a strong supporter of the Western Balkans EU integration. In 2003 it was Greece that organized the EU-Western Balkans Thessaloniki Summit, during which was presented and endorsed by the European Council ‘The Thessaloniki Agenda for the Western Balkans: Moving towards European Integration’. In the last years, because of the financial and economic crisis, the Greek influence in the EU integration of the region has waned and overtaken by the Berlin Process.  The Berlin Process, France’s new involvement in region, combined with French President’s Macron declaration in Belgrade that the EU should reform itself before it enlarges, leaves little room for a return of Greek initiative in relation to the EU integration of the region, as in 2003 in Thessaloniki. For this reason, probably Mitsotakis’ government will be more focused on bilateral relations and bilateral problems as with Albania, North Macedonia, Turkey, than in a region-wide approach. 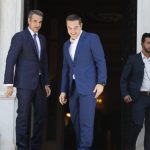