The deal out of the White House: nothing to celebrate 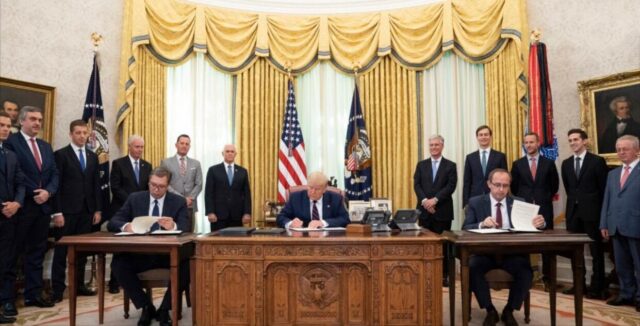 The WH signature fever exposes the hypocrisy and mediocrity in the Albanian capitals, as politicians foolishly rush to proclaim “historical achievement” over their social media accounts.

If one followed the social media accounts of former statesmen and current ministers and MPs in Albania right after the Serbia and Kosovo sides signed at the White House, one would be legitimized to believe that finally the historical peace agreement was coming through alongside key regional cooperation dynamics. In fact none of the sort happened: in a document that sprawled topics from human rights to counter-terrorism and mostly put a freeze on the controversial bilateral items, Serbia and Kosovo once again “mostly agreed to disagree.”

Indeed the hypocrisy and mediocre level of the little men and women on both sides of the Albanian mountains shone through once again as they latched themselves onto one or two keywords in the document to declare victory.

If we are to reflect soberly on the meeting and on the text that came out two feelings are warranted: a modest salutation of the fact that the dialogue has been kicked back to life by the sheer force of the American engagement and second a moderate disappointment that the necessary reconciliation logic is nowhere to be found.

For the first feeling, the return of attention and deployment of diplomatic resources from the US Administration at the highest levels is very much welcome. This engagement engulfed this time even the issue of recognition by Israel, an important milestone for Kosovo. However this still needs to happen as the commitment so far needs to survive Netanyahu’s fragile domestic standing and the ire of states such as Turkey which immediately condemned Kosovo for accepting an embassy in Jerusalem.

The way this was communicated to the American public is the caveat with Kosovo being grouped among Muslim, if not Middle Eastern countries. This usage for electoral campaign downplayed once more the substance of bilateral talks and bilateral understanding.

That said, the content of the document is truly worrisome. First of all this cannot be called in true seriousness an agreement. Agreements are binding and have instruments that oblige states to compel. Agreements also have the mechanisms to secure their implementation. In the midst of loosely connected security concerns (5G, Hezbollah) and human rights concerns weirdly thrown in (as the two states concerned have never had any issue with LGBT rights among them!) are buried items of true significance and gravity such as the missing persons and the functionality of a joint border point. By virtue of this ill-suited combination the importance and significance of each item is diminished and a lot of confusion is produced as a side effect.

Although the text starts with important economic projects and the commitment to follow through with them, these are plagued from the lack of funds. It was true of the Berlin process and its stands true to the Washington DC one as well. These large infrastructural investments of connectivity in the region have stalled for years despite grandiose talk of every relevant EU Summit, due to the difficulty in securing funds. The only breakthrough has come for Chinese funded highways, something that for sure Washington in these days would shriek at.

And finally we come to the central core of the problem: the very approach with which this significant foreign policy issue is treated. The peace agreement between Serbia and Kosovo is the most necessary change for the entire region in terms of stability, prosperity and integration. This depends heavily on the reconciliation process which in turn cannot even start if the past does not stand confronted. This must start with the aggressor admitting its responsibility, there is no other way.

Serbia is the country in the region which waged wars with its neighbors and waged war with the entire West. It lost all those wars. It has committed countless war crimes and engaged in genocide. Serbia has not only refused to face the past but from time to time it goes back to glorifying the very same figures of war crimes and their ethno-centric philosophy. Kosovo on the other hand which has faced the greatest loss and suffering, as a victim of these wars, is being treated with much disdain from the international courts which continue to subpoena former UCK commanders.

As the process of bilateral dialogue returns to Brussels, where the approach is even more technical and devoid of substance and progress, the fear is that a significant opportunity was lost to really break through the impasse. Much of the fanfare and decoration has faded within hours. As for the impact of the economic deals once can only retain a vague hope for the best. 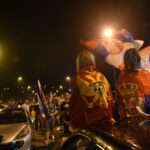 Next Story
A New Narrative from Montenegro